S-3 Shop's employees are highly-trained, experienced and dedicated to the success of our clients. 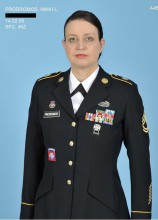 Her military training includes: DLI (Spanish), DINFOS (broadcaster, broadcast manager, and instructor/trainer courses), OCT, MRT, ASIST (levels I & II), CPOF, DTMS, COR, CLS & AED, and battle-staff certification.  She served as an S-3 NCO and the NCOIC for the 1110th Mobilization Support Battalion from January 2012 until the unit’s deactivation in 2016. 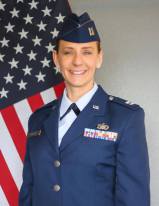 Jill Charpia was born and raised in Iowa.  After graduating High School in 1997, she joined the Air Force, serving as an enlisted Guidance and Control Apprentice at Eglin AFB, FL.  She applied for, was accepted to, and successfully completed the USAF ROTC program.  As an officer, she has served stateside in Hanscom AB and Hurlburt Field.  She has served overseas as an officer and civilian contractor.  Capt. Charpia deployed to Bagram AB, Afghanistan IN ’03-’04 where she served as the JCC-I/A (Joint Contracting Command Iraq/Afghanistan) Deputy Commander.  In 2006, she served as a Lead Acquisition Analyst for the government contracting company, CACI in Baghdad, Iraq.  In ’08-’09 she started her own business and returned to Iraq to serve as the Director of her Business Transition Center and services company.  From ’09-’11 she wore multiple hats serving as both IMA and civilian.  As an IMA she served in the Pentagon as an Action Officer and subsequently served as the Pacific Command IG for Contracting at Anderson AFB, Guam and Hickam AFB, HI.  In ’11-’12 she served as a Prime Contract Manager with Fluor in Kabul, Afghanistan.  Upon her return, she began a consulting firm that developed proposals for Security companies of all sizes and helped companies navigate the Federal Acquisition System.  Her military service ended honorably in 2013.

Her civilian education includes a B.S. in Business Management from the University of West Florida in 2001, a Masters of Business Administration (MBA) from the Univerity of Phoenix in 2004, and she is currently pursuing a Doctorate in International Business from Northcentral University to be completed in 2018.  She is a member of the Veterans of Foreign Wars (VFQ) and the Wounded Warrior Project (WWP).